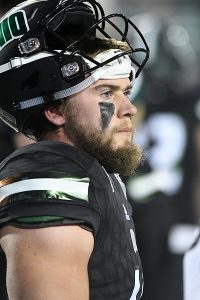 Coming out of a small school in Covington, Ohio where he was one of just 47 people in his graduating class in 2014, A.J. Ouellette rolled the dice by walking on at Ohio University.

After all, he had received very little interest from Division I football programs – even after being named the Offensive Player of the Year in the state of Ohio his senior year.

But it didn’t take long for Ouellette to be rewarded with a scholarship as Frank Solich and the rest of the coaching staff at Ohio quickly realized A.J. was a special talent.

Quickly, Ouellette proved Solich right as he started on special teams in his first collegiate game against Kent State University and ultimately helped lead the Bobcats to a 17-14 come-from-behind victory by carrying the ball six times for 30 yards on the final drive that led to a walk-off field goal.

His breakout game came a couple of weeks later in Ouellete’s first career start at running back against Idaho at Peden Stadium in Athens, Ohio. The true freshman racked up 169 yards of total offense and scored two touchdowns in a 36-24 victory.

This led to an amazing freshman campaign as Ouellette led the team in rushing with 785 yards, and seven touchdowns… recorded a season long 65 yard rush against Eastern Illinois (Sept. 27)… had a season high 155 yards on 29 rushes against Buffalo (Nov. 5)… compiled 21 receptions for 133 yards and three touchdowns on the season. A.J. was named MAC East Offensive Player of the Week twice and was chosen as the 2015 Player to Watch by the prestigious Touchdown Club of Columbus, Ohio.

A.J. followed up an impressive freshman campaign with an equally impressive sophomore season as he led the team in rushing again with 691 yards on 151 carries… averaged 4.5 yards per carry and 52.8 per game… caught 12 passes for 74 yards throughout the season… recorded 4 solo tackles defensively… was the lone running back used in a 26-21 win at NIU… racked up 140 yards on the ground on 30 carries… finished with a total of six touchdowns and caught 12 passes out of the backfield for 74 yards.

Prior to his true junior season in 2016, Ouellette was chosen as one of the team captains. Unfortunately his season ended on the third play of the season opener as Ouellette suffered a season-ending foot injury that required surgery and forced him to medical redshirt.

After a grueling rehabilitation process, Ouellette was able to come back with a vengeance in 2017. Once again named a team captain, Ouellette became the first Ohio back to reach the 1,000-yard rushing mark since 2012 by rushing for 1,006 yards on 192 carries. He scored seven rushing touchdowns… caught 10 passes for 97 yards and one touchdown… broke 100-yards rushing four times on the season, including a season-high 145 yards against Eastern Michigan… season long rush of 63 yards and reception of 42 yards. For his efforts, A.J. was named Second Team All-MAC Offense.

This set up a historic senior season for Ouellette in 2018 as he helped lead the Bobcats to a 9-4 record and a 27-0 win over San Diego State in the Frisco Bowl. For the season Ouellette rushed for 1,306 yards on 213 carries (105.5 jpg) and scored 12 rushing touchdowns… caught 21 passes for 212 yards and two scored… tallied 1,518 all-purpose yards (116.8 jpg)… had six 100-yard rushing games… had a season and career-high 196 rushing yards on Nov. 14 in a 52-17 win over Buffalo… and was named the Offensive MVP of the Frisco Bowl after rushing for 164 on 29 carries and catching 2 passes for 33 yards. Ouellette was also named First Team All-MAC Offense and chosen by the prestigious Touchdown Club of Columbus as the MAC Player of the Year. 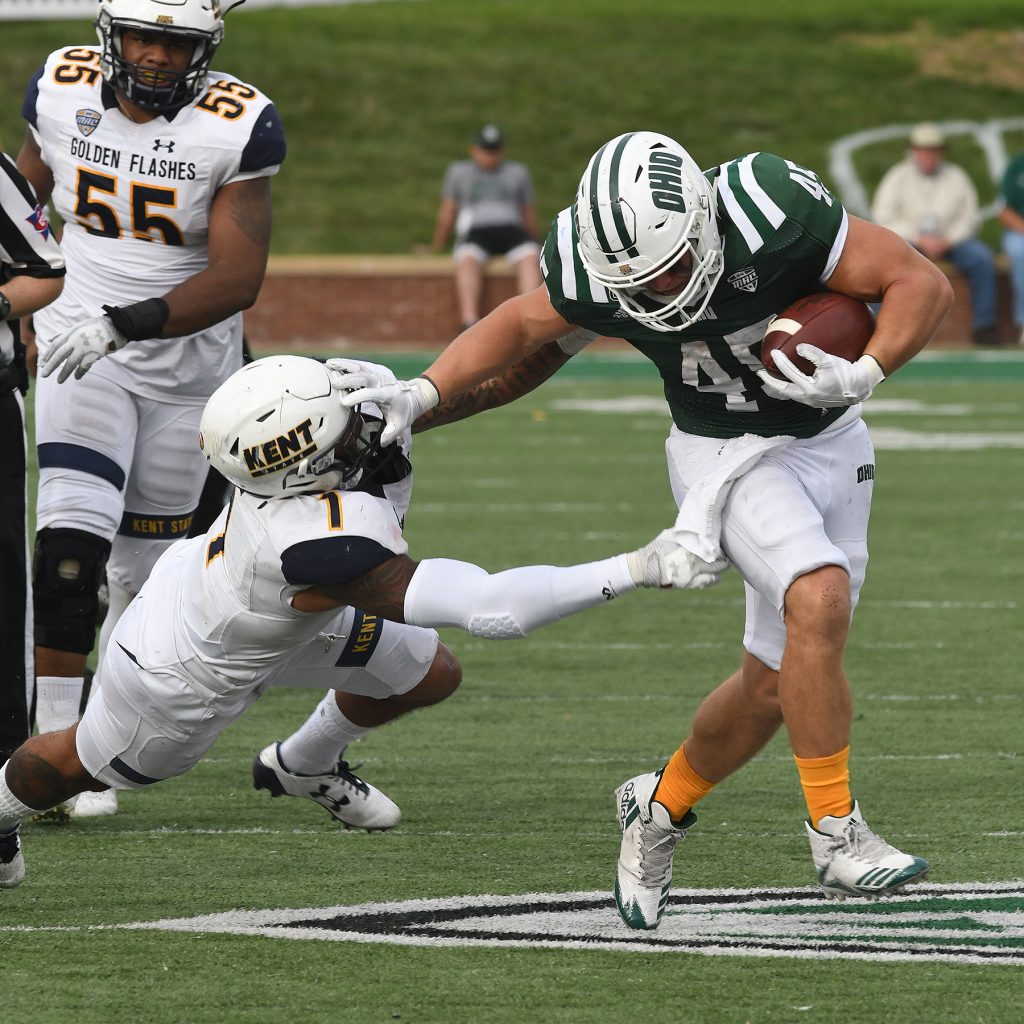 A.J. Ouellette fends off a Kent State defender with a stiff arm on his way to a touchdown run.