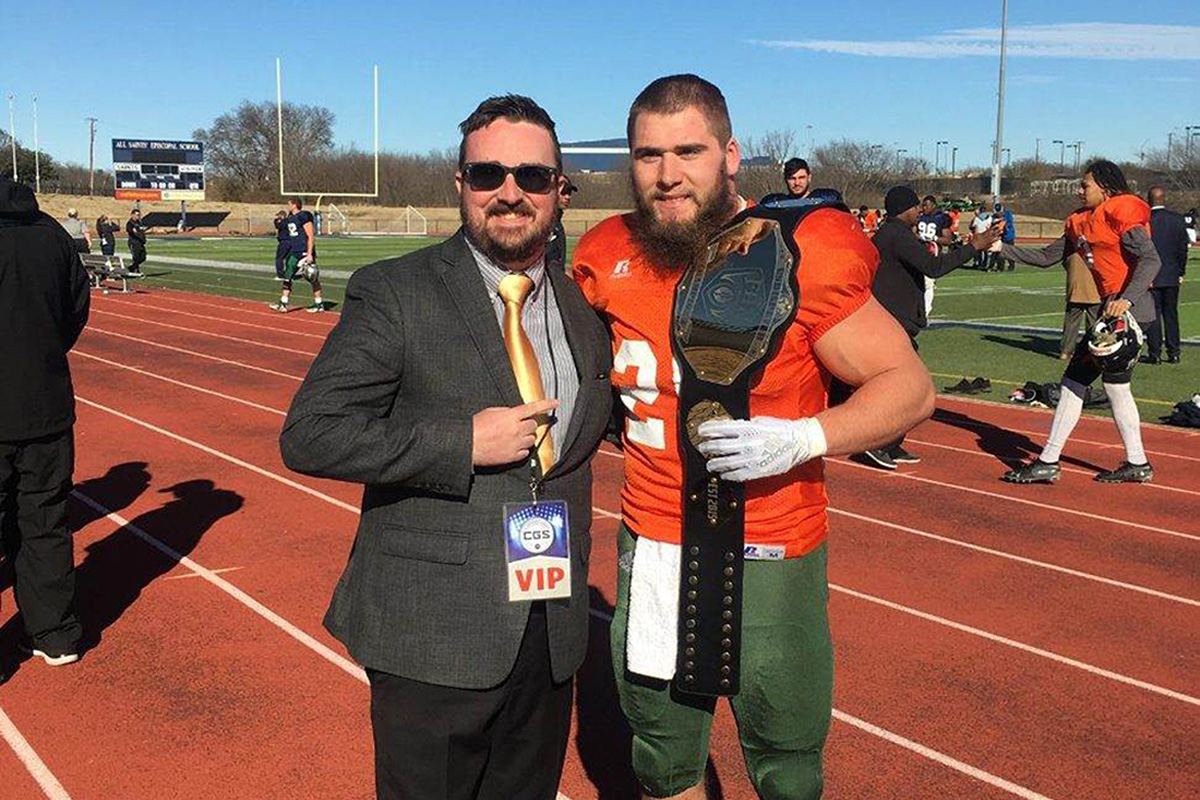 FORT WORTH, TEXAS – 2014 Covington graduate and former Ohio University star running back A.J. Ouellette has aspirations of reaching the pinnacle of football by earning a spot on an NFL roster this coming fall. To give himself the best possible chance, Ouellette is doing everything humanly possible to put his name out there for every NFL scout in hopes of being drafted in April.

Yes, the odds of accomplishing his goal is staggering as just nine in 10,000 high school players (0.09%) and one in fifty collegiate players (2%) end up being drafted by an NFL franchise.

Yet, Ouellette has beaten the odds before as he came out of high school without any scholarship offers and little interest from any Division I programs in the country. He walked on at Ohio University, quickly earned a scholarship and eventually became one of the best running backs in the history of the program.

Now Ouellette is trying to beat the odds once again at the highest level of the sport.

And last week Ouellette took a major step forward in accomplishing his goal as he took Offensive MVP honors at a Gridiron Showcase in Texas with NFL scouts on hand to witness his talent first hand.

“It was a great experience for me,” Ouellette said. “A lot of (NFL) teams talked to me and seemed to show a lot of interest.”

The showcase put prospects through a variety of situations, challenging them mentally and physically.

“The first couple of days there were a lot of meetings and questions asked to test your knowledge of the game,” Ouellette explained. “Then we had three days of full contact scrimmages where coaches put you in certain situations to see how you would react.”

And Ouellette rose to each occasion as he showcased his ability to adapt to any situation at a moment’s notice.

“Of course they had me at running back and I was happy that they could see how well I block and how I’m able to catch the ball out of the backfield,” said Ouellette. “They threw a lot of different blitz packages at us and I was able to pick everything up because of how well I was coached by Coach Solich and Coach Albin at Ohio.”

Ouellette also had the opportunity to showcase his adaptability after other players were injured during the scrimmages.

“Because of how a lot of the NFL systems are today, they had tight ends moving back and forth from tight end to fullback,” he said. “Well, a couple of the guys got hurt pretty bad, so I volunteered to step in there at fullback. That was a good experience because I was able to show how versatile I can be.”

The results were what Ouellette had hoped for as he was interviewed by several NFL scouts and received the highest praise of any player who participated in the showcase.

“I had several scouts talk to me for a long time,” Ouellette said. “All of the coaches who were there said I was hands down the best player on the field, so I guess I made a really good impression.”

An impression Ouellette hopes leads to more interest down the line.

“Hopefully I got my name out there a little more,” he said. “That’s what it’s all about – getting in front of NFL scouts so they can see what I can bring to their team. All I need is a chance and I know I will stick with anyone that chooses to pick me up.”

Even with his big week in Texas, Ouellette isn’t about to sit back and “HOPE” for a chance.

Instead, he plans to continue training extremely hard at Enhance U while his team works on getting him more looks from NFL scouts.

“I have a great team behind me working really hard to get me noticed,” he said. “I’ll go anywhere to get noticed. I’m hoping to get invited to the Senior Bowl and the NFL Combine and I look forward to the Pro Day at Ohio University. I’ll do whatever it takes, even drive across the country to work out for any team if that’s what I need to do to get a shot at the NFL.”

As previously mentioned, the odds of anyone making it to the NFL is astounding.

But don’t talk to A.J. Ouellette about odds because he’s beaten them before.

And he’s well on his way to doing it again.