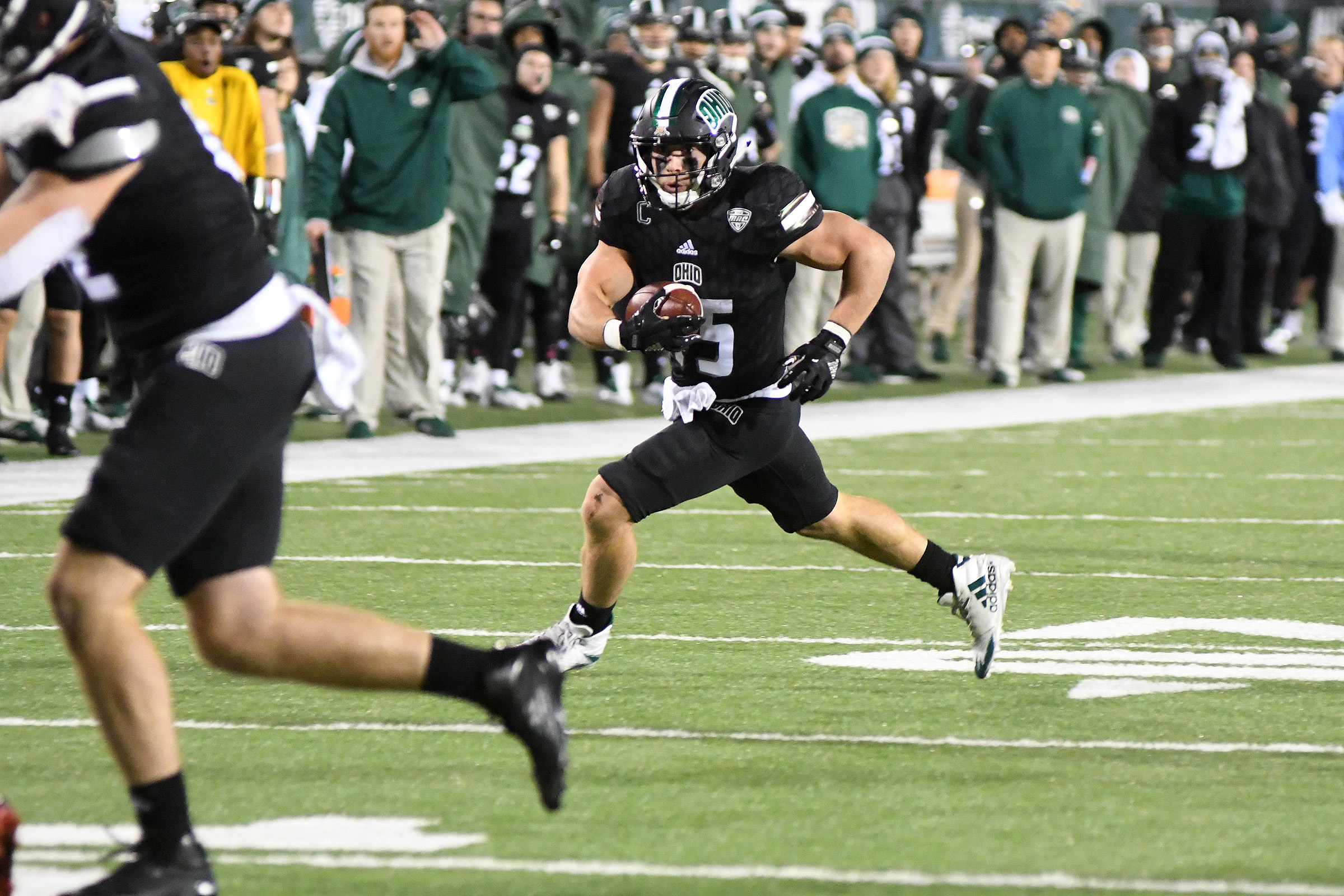 NASSAU, BAHAMAS – Every time A.J. Ouellette steps on the football field for the Ohio Bobcats it’s vindication to everyone who doubted his abilities after a stellar high school career at Covington High School.

Overlooked by every school in the country as he didn’t receive any scholarship offers (or many preferred walk-on offers), Ouellette rolled the dice three years ago by walking on at Ohio University and quickly became a household name in Athens by claiming the starting running back position four games into his freshman season.

Now, a red-shirt junior after a season-ending injury a year ago, Ouellette became the first Bobcat running back to surpass the 1,000-yard rushing mark in a season since Beau Blankenship in 2013 after a short – yet successful – appearance against the University of Alabama at Birmingham in the Bahamas Bowl on Friday.

It was unknown until game-time as to whether Ouellette would be able to participate in the bowl game due to a severe shoulder injury he suffered in the regular season finale against Buffalo.

But Ouellette, whose work ethic and toughness became legendary during his playing days at Covington High School, walked out onto the field at Thomas Robinson Stadium in Nassau, Bahamas with the rest of the Ohio offensive starters for the Bobcats’ first possession.

And on his fourth carry of the game Ouellette bulled his way seven yards to surpass the 20 yards he needed going into the contest to reach the 1,000-yard plateau as a gathering of family and friends celebrated at Guadalajara’s Mexican Restaurant in Covington, who was hosting a bowl game party in honor of A.J.

Unfortunately Ouellette’s bowl game experience would end prematurely with 2:32 left in the first half as he reinjured his shoulder on a 13-yard reception from quarterback Nathan Rourke. Still, the fact that Ouellette was able to overcome the painful shoulder injury suffered against Akron to play in the bowl game was an amazing accomplishment in itself.

Ohio University went on to win the game 41-6, which is also Ouellete’s first bowl win of his collegiate career – and in typical A.J. fashion he provided emotional leadership from the sideline with his arm in a sling.

And although Ouellette wasn’t able to finish the game, it was still an experience he will likely remember for the rest of his life as his girlfriend, Haley Adams, was on hand thanks to the generosity of her Lady Bobcat softball teammates who pooled their financial resources to purchase Adams game and airline tickets so she could watch A.J. in person.

On the season, Ouellette led the Bobcats with 1,006 rushing yards and seven rushing touchdowns on 192 carries for a 5.2 yards-per-carry average. He also caught 10 passes for 97 yards and another score to finish with team-leading 1,103 all-purpose yards.

Career wise, Ouellette now has 2,478 rushing yards on 506 carries for a 4.9 yard-per-carry average and 304 receiving yards on 43 catches. He also has 23 career touchdowns.

And to think, he has another year of eligibility to ad to those numbers.