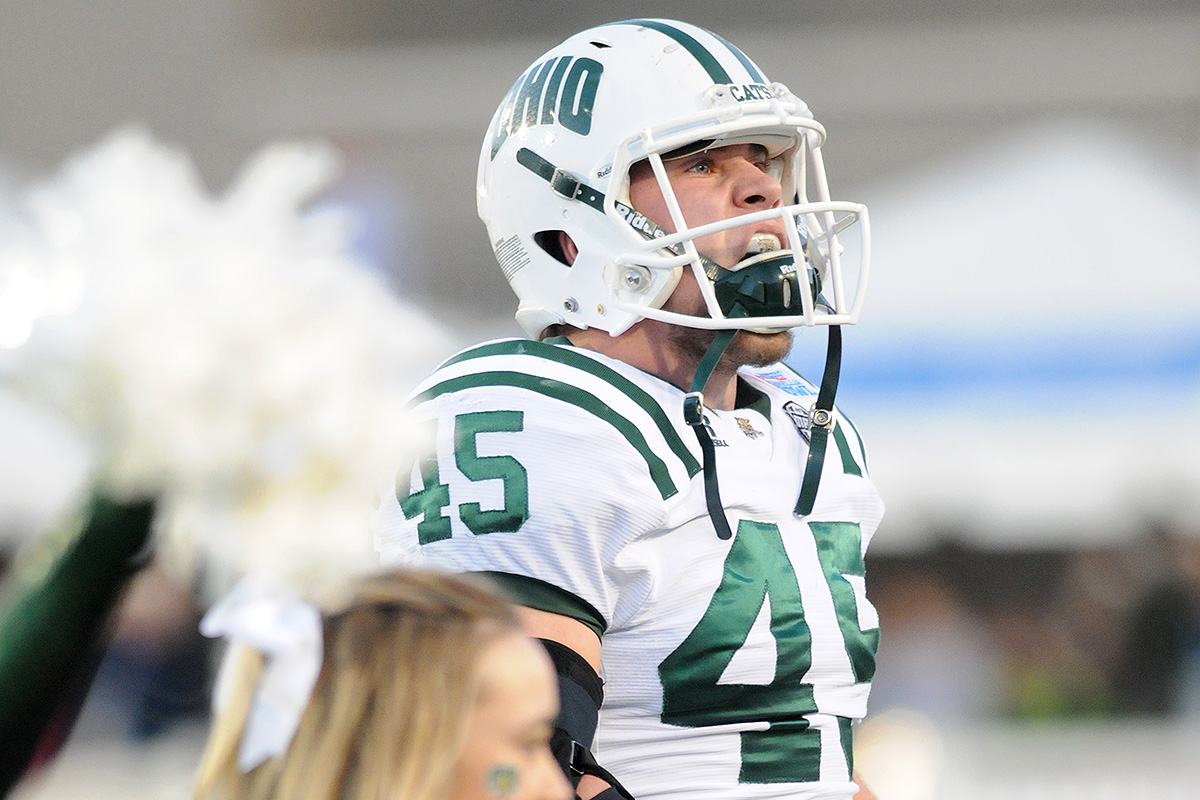 MONTGOMERY, ALABAMA – It wasn’t the way A.J. Ouellette wanted his sophomore season to end – a 31-29 loss on a last second field goal to Appalachian State in the Raycom Media Camellia Bowl at the Crampton Bowl in Montgomery, Alabama.

But the 2014 graduate of Covington High School, who led the Ohio Bobcats in rushing for the second straight season with 687 yards, left an impression on the Appalachian State faithful after gaining 46 tough yards on 14 carries.

“That number forty-five for Ohio is a beast,” said a Mountaineer fan at the bus stop after the game. “I’m just glad they kicked a field goal on that last possession instead of going for it (on fourth down). I don’t think we would have stopped them if they gave him the ball.”

The situation the fan was referring to occurred when Ohio was trailing 28-26 with just under 2:00 left in the game and the Bobcats were facing a fourth-and-one at the three after Ouellette gained nine yards on two straight running plays. Each time Ouellette was hit at the line of scrimmage and somehow managed to churn out positive yardage.

In typical Ouellette fashion, he took responsibility for coming up short of a first down on the third down run.

“Coming up short on that last drive, I felt like I should have got that last yard (on third down),” said Ouellette in his post-game interview. “We could have just ran out the clock right there and won the game.”

Instead, it gave a high-powered Appalachian State offense an opportunity to steal the win – which did by driving the length of the field and connecting on a 23-yard field goal as time expired.

“It was a fun game,” Ouellette said, who has 1472 rushing yards in his first two seasons at Ohio. “The whole game was fun, but you know, it’s hard to lose the way we did.”

What made it even more difficult to swallow was the fact that Ohio had built a 24-7 lead through three quarters thanks to a stellar performance by its defense – a defense that scored two touchdowns on interception returns and set up another score with an interception inside the Mountaineer ten.

Ouellette was the benefactor as he converted the theft into a seven-yard scoring run in the first half.

Unfortunately for Ohio, it helped out Appalachian State’s comeback cause with two fourth quarter interceptions.

Ohio’s defense turned the momentum by recording a safety with 6:06 left in the game. The Bobcats then drove 51 yards in eight plays in 4:19 to retake the 29-28 lead on a field goal with 1:47 left on the clock.

Which was just enough time for Appalachian State to stun the Bobcats with a field goal of its own.