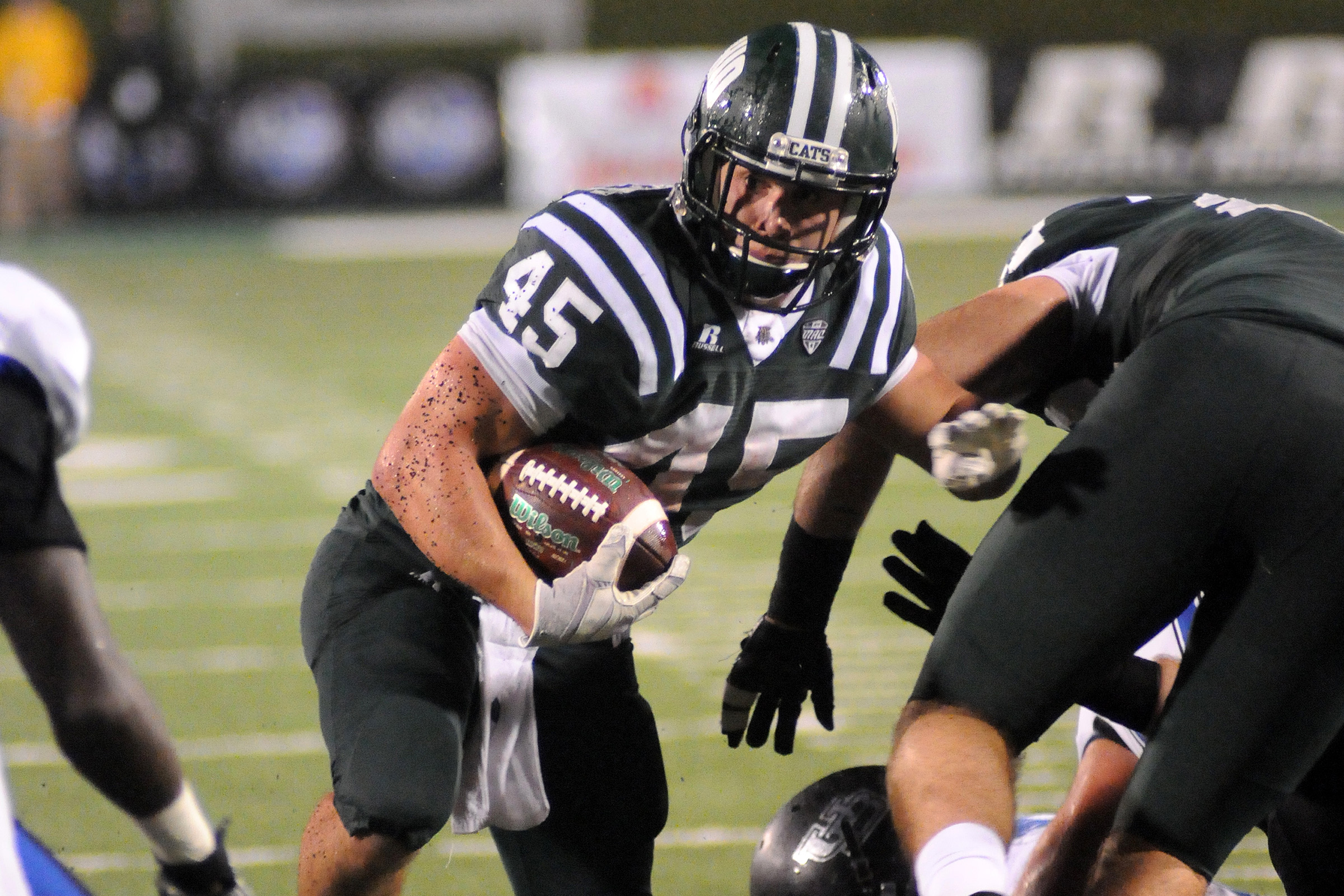 ATHENS, OHIO – In high school, A.J. Ouellette and his Covington teammates gave each other nicknames – Dalton Bordelon as Psycho, Justin Williams being Sunshine – that sort of thing.

For Ouellette, the nickname given to him by his buddies was “Prime Time”.

The nickname is a fitting one for Ouellette, because he always seems to shine the brightest when the lights are on – when it is “Prime Time”.

And Ouellette, now playing as a true freshman at Ohio University, lived up to that nickname Wednesday night by rushing for 155 yards and two touchdowns on 29 carries to help lead the Bobcats to a 37-14 victory over Buffalo in a nationally televised game at Peden Stadium in Athens.

He also had two catches for 11 yards coming out of the backfield on a night where he returned from an ankle injury.

“I think it shows an awful lot about his character, his heart, his toughness,” said Ohio University coach Frank Solich of Ouellette’s performance coming back from an injury. “I really like him as a running back. He’s done everything that you could ask a player to do.”

Ouellette’s performance came in an opportune time considering the weather conditions weren’t ideal throughout the game as a steady drizzle fell the entire evening.

Still, Ouellette did the little things that made a huge difference – protecting the football, picking up blitzes, catching the ball out of the backfield and keeping his feet churning in heavy traffic for positive yardage. He also carried out his fakes so well that it caused an inadvertent whistle on a play in which the Ohio quarterback was caught in the backfield for a loss.

“He’s a complete back for you,” Solich said. “He came out of the backfield to make a catch or two today. The one I thought was a really good catch, an important catch at the time. It’s great that he’s having the kind of year that he’s having.”

The year Ouellette is having is anything short of amazing considering he joined the Bobcat team this past summer as a walk-on. I just a few short months he was performed his way into a full scholarship and a starting position.

He currently leads Ohio in rushing with 580 yards on 117 carries and has a team-high 7 touchdowns. Ouellette also has 93 receiving yards on 12 receptions.

In Wednesday’s 155-yard rushing night, Ouellette scored both of his touchdowns on short runs that led to a 17-0 Ohio lead at the half and then became the workhorse in chewing up yardage and eating clock in the second half.

And as the game progressed, Ouellette became stronger and stronger before he was finally given the rest of the night off with Ohio leading 30-7 early in the fourth quarter.

“A.J., who’s taken over the job and showing he’s the man, is probably the most positive thing for our offense,” said Solich. “I thought he had an excellent game for being a guy that had limited practice this week because of his injury.”

For Ouellette, it wasn’t a matter of what he did as an individual. Instead, he gave credit to his teammates, primarily the offensive line.

“They were great,” Ouellette praised of the Bobcat line. “I give all of the credit to the line. They do their job and I just read them, that’s all.”

Ouellette, like he was in high school, is still a man of few words as he remains uncomfortable addressing the media.

Having to talk about himself has become the most difficult transition for him from high school to collegiate level.

“I hate it,” he said of post-game interviews. “Sitting up there (in the media room) is hard because they throw all of these questions at you when you don’t have time to reflect on the game. I always feel they should be talking to the offensive line because they’re the ones who do all of the work.”

Interviews are something he’ll have to get use to, because A.J. Ouellette’s popularity continues to soar with each outing.

That’s what happens when you shine in “Prime Time”.

“Number Forty-Five Is A Beast”…