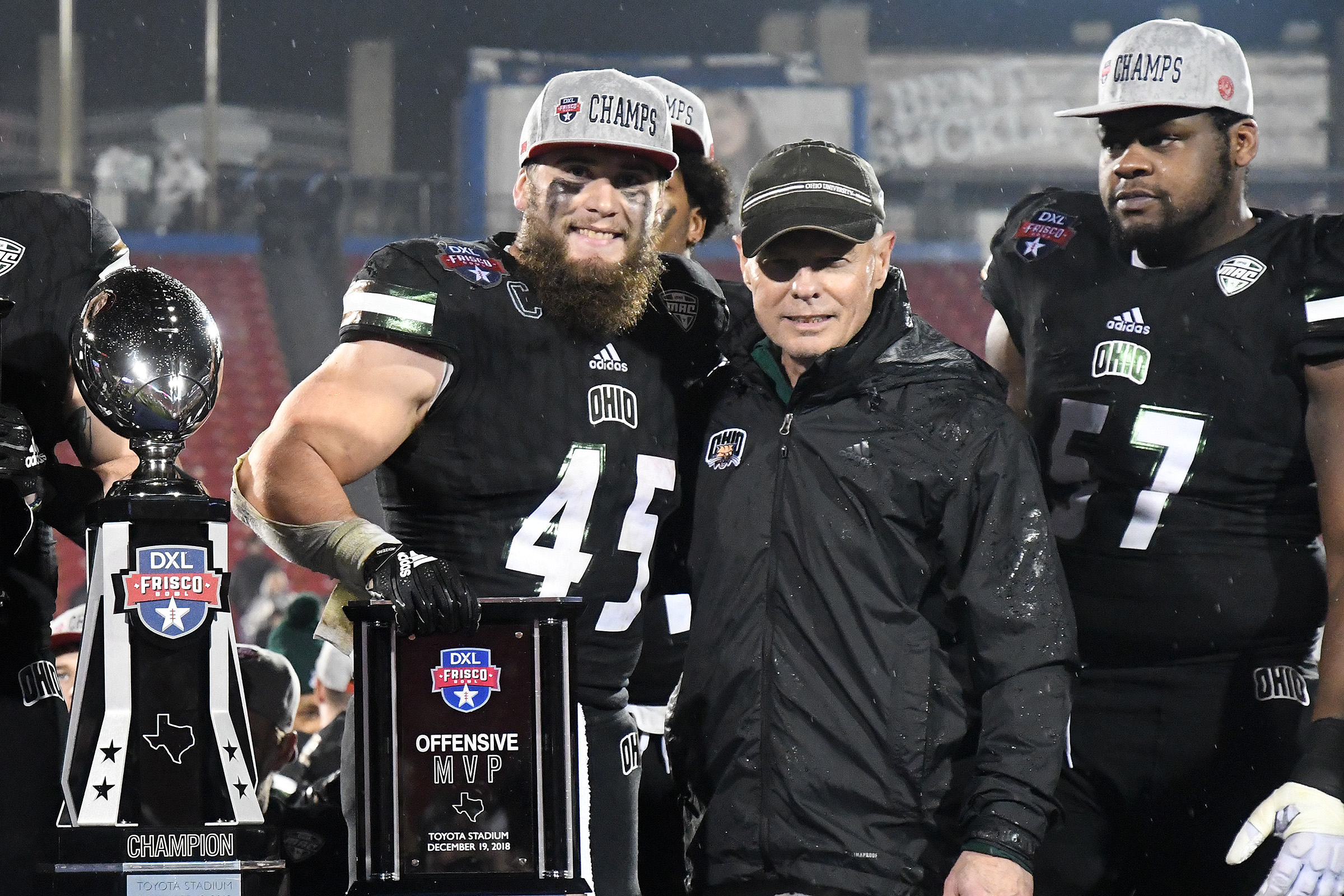 FRISCO, TEXAS – Prior to the final game of his historic collegiate career as a member of the Ohio Bobcats, 2014 Covington graduate A.J. Ouellette sat at his locker at Toyota Stadium in Frisco, Texas with a sharpie in his hand writing a message on each tapped wrist. On one wrist he wrote the words “No Name” and on the other wrist he wrote “Beat The Odds” – just to remind himself of where he started and how far he has come in his collegiate career.

“Look at this,” said A.J., showing the writing on his wrists. “This is what it’s all about.”

A.J. remembers. He came out of high school with “No Name” outside of tiny Covington, Ohio – no scholarship offers and virtually no interest from any program.

Yet, he walked on at Ohio University and “Beat The Odds” by doing what had allowed him to put together a stellar high school career – by working harder than anyone else.

“A.J. is special,” said legendary Ohio coach Frank Solich. “He’s just one of those young men who does everything right – on and off the field. Nobody outworks him.”

Ouellette’s hard work has paid huge dividends as he has stamped his name all over the Ohio University record book in the following statistics:

And on Wednesday Ouellette showcased his amazing determination to the entire country against San Diego State University as he earned the Offensive Most Valuable Player award in leading Ohio to 27-0 win by rushing for 164 yards on 29 carries and catching 2 passes for 33 yards in a game that was broadcast live for all to see on ESPN.

“It feels so good,” said Ouellette in regards to capturing a win in his final collegiate game. “Our defense played lights out and our offensive line was outstanding. They made my job easy.”

San Diego State came into the game as one of the top ranked defensive units in the entire country against the run. Yet, Ohio challenged the Aztecs from the outset by handing Ouellette the ball on its first six offensive plays.

Behind the running of Ouellette, Ohio was able to convert its opening drive into three points on a field goal – all while eating up clock.

“We felt we could move the ball against them on the ground,” Solich said. “Maybe not the huge runs, but the four and five yard runs. That moves the chains and takes time off the clock.”

Ohio took a significant amount of time off the clock in a very fast opening quarter and then reached pay dirt on its second drive of the game, which covered 15 plays and 72 yards thanks to the ground-and-pound approach.

The Bobcats then took a 17-0 lead in the waning moments of the half thanks to a huge third-and-ten conversion where Ouellette caught a pass in the flat from quarterback Nathan Rourke and hurdled a defender for an 18-yard gain to the Aztec 11. On the next play Rourke scrambled out of trouble and scooted his way in for the score.

“He’s a leader,” praised Ouellette of Rourke. “I’m excited to see what he does next year.”

At the break Ouellette had already established himself as the premier weapon in the Bobcat offense as he had 97 yards on 16 carries and one reception for 18 yards.

And with the lead, Ohio stayed with the ground-and-pound strategy in the second half – running Ouellette up the middle and then getting him on the outside on the option pitch.

This led to a field goal by the Bobcats on the opening drive of the second half and then an eight-play drive that reached the Aztec 34 before an interception in the end zone stalled the drive.

But the Ohio defense was able to hold on the ensuing possession to set up a little trickery by the Bobcat offense.

With San Diego State focused on the run, Ohio used Ouellette as a decoy by handing him the ball and having him pitch the ball back to Rourke. The Bobcat quarterback then threw to a wide open Andrew Meyer for a 35-yard scoring strike to virtually end all hope for an Aztec comeback.

“That was a big play in the game,” explained Solich. “We had that in our arsenal and we felt that it was the right time to run it. Of course, you are taking a chance there because if they blitz the play is dead. But we were able to hit it and that made it much more difficult on them to come back.”

Holding a 27-0 lead Ohio put the ball in Ouellette’s hands the rest of the way to kill the clock.

And in typical Ouellette fashion, he praised his coaches for making his final collegiate game and season a memorable one.

“The way the team finished the season is a tribute to our coaches,” Ouellette said of the Bobcats finishing with a 9-4 record and a second straight bowl victory. “We have a hard nosed head coach and it showed late in the season wearing other teams down. You can tell their bodies weren’t used to the all the pounding from the season, but for us to go out this way is a tribute to our seniors.”

It was also a tribute to A.J. Ouellette for what he was able to accomplish in earning the Most Valuable Player award.

He went from a “No Name” player to one that “Beat The Odds”.

And he went out in style.