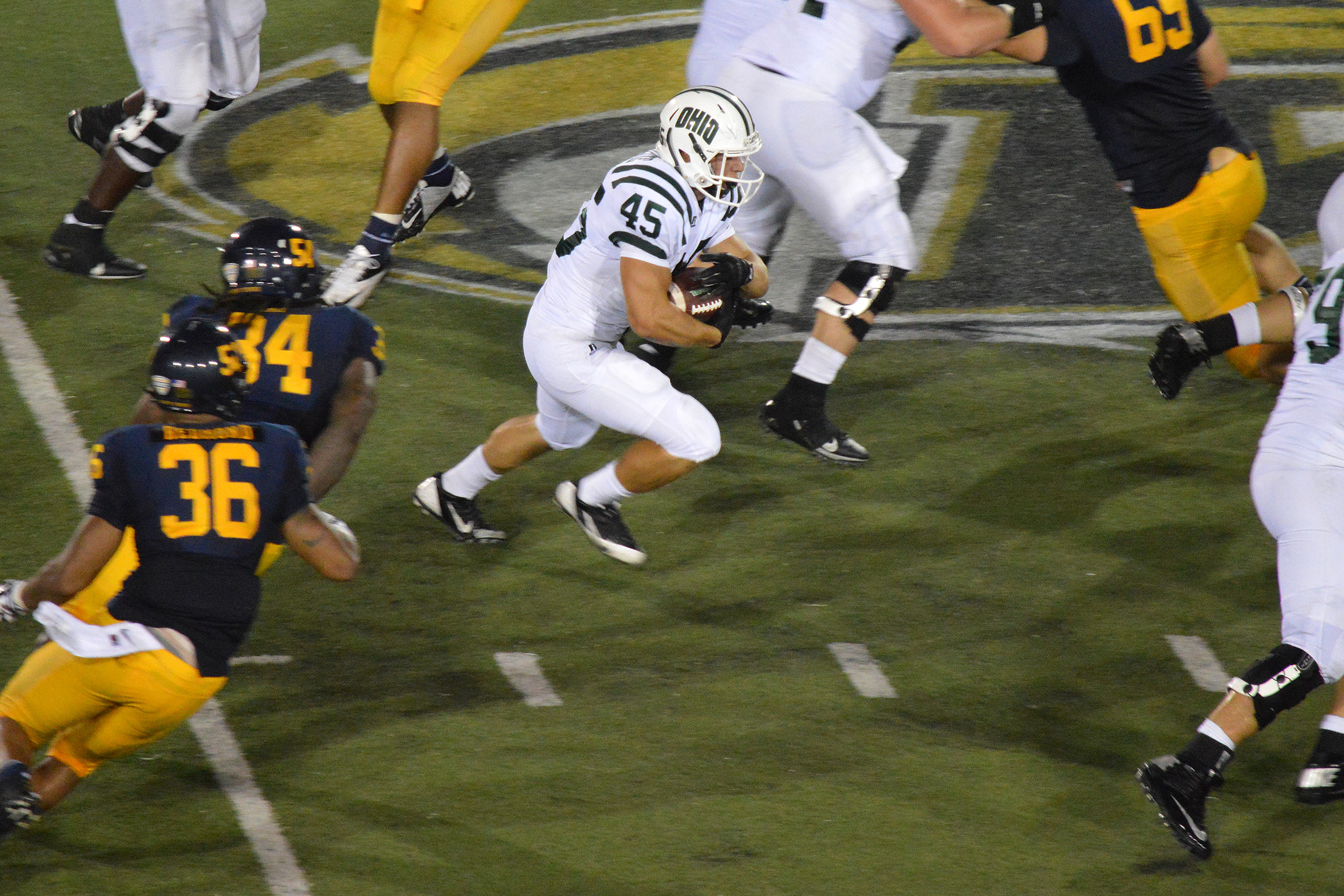 KENT STATE, OHIO – Wow, what a way for AJ Ouellette to start his collegiate career – by helping Ohio University overcome four fumbles with huge plays on the ground in the final minutes to set up a game-winning 44-yard field goal in a 17-14 win over Kent State in a game that was televised live on ESPN3.

The Bobcats dominated the game statistically, racking up 437 yards of offense to just 295 for Kent State.

But four fumbles led to a 14-14 tie as Kent State scored with 3:34 left in the game on a 25-yard touchdown strike off of the fourth Bobcat fumble.

Enter former Covington Buccaneer and true freshman AJ Ouellette to save the day at the running back position with the game on the line.

After a quick pass by the Bobcats netted 13 yards, Ouellette took his first carry 9 yards to the Ohio 47.

On the very next play, Ouellette had a run that was vintage AJ as he was hit at the line of scrimmage and cut back to only be hit by several more Kent State players. The former Buccaneer then carried four and then five defenders for a 13-yard run and a first down at the Kent State 40.

He then carried the ball four more times in the drive, eventually running over a defender on the sideline for a four-yard gain to set up a game-winning field goal attempt from 44 yards out with three seconds left.

Fittingly, OU’s Josiah Yazdani made true on the attempt to give the Bobcats a huge season-opening win.

In all, AJ carried the ball six times for 30 of the 48 yards accumulated on the final drive that put the Bobcats in position to win the game in thrilling fashion.

Afterward, Ouellette was thrilled with the opportunity to contribute.

“It’s amazing,” he said, while visiting his parents Phil and Jody Ouellette after the game. “To help my team win is what made this great. When coach called my number Derrius (Vick) told me to take the starting job. I don’t know if I did that, but I did what I could do to help out the team.”

Vick, the Bobcats’ junior quarterback, had faith in number 45.

“AJ’s a quiet dude. He didn’t really say anything,” Vick said. “I looked at him and said ‘Take the job, it’s on you.’ He accepted it, and he ran hard. Next man up.”

Before being inserted at running back, Ouellette contributed greatly on special teams as a blocker in the return game. His first hit of the night was a decleater, where he put a defender on his back.

But that was all a prelude to the grand finale, where AJ ignited a Bobcat rally in the final minutes that led to victory.

Running With A Purpose…